Hey guys! I’ve been, like, more than super busy in the past two weeks with finals and whatnot, but I realized last night that we only have a week until the world ends! plus I kinda ran out of ideas for why the world is ending, but I got some help, and I have 2 more reasons for you!

We all grew up with sesame street. they taught us the ABC’s, numbers, and how to love cookies. It’s been around since before even my dad was born, since 1969. But now the guy who plays Elmo, Kevin Clash, is being fired! What will the world be like when Elmo has a new voice? 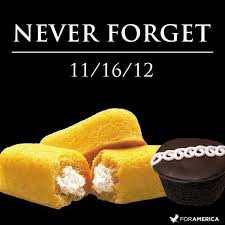 Hostess went bankrupt? what the heck?! twinkies are, like, the world’s universal fatty foods! how could the entire world jut stop buying twinkies? Did Americans forget that they need to eat to continue to gain weight? it doesn’t make any sense to me. And then, what makes even less sense is when people found out that Hostess was going out of business, all of their products flew off the shelves! a single twinkie in “mint condition” sold for 500 dollars on ebay. in Chicago, when Hostess’ last shipment hit the stores, people went mad, there were fights all across the city, people stealing boxes out of each other’s carts…. it was worse than black Friday. And that’s saying something.

Now I need to find two more reasons by Friday night….
oh, and speaking of which…..

Now, you and I both know that the world won’t really end, the 21st will come and go, but if it did, would you be fine with that? Is there nothing you would think to do in your final moments? There’s definitely some things that I don’t want to go my whole life without doing. If the world were to end on Friday, if you could see the faint outline of a meteor as it crashes toward you, what would be the last thing you do on this planet? would you want to spend your final moments lying on your back, watching the sky change colors and feeling the temperatures rise as the meteor gets closer? would you break a law, or do something you normally wouldn’t because you’re afraid of the consequences? or would you rather be blissfully unaware, distracting yourself somehow so that you don’t have to think about it? would you spend it running around like a chicken with your head cut off, wishing you had more time to say and do what you always meant to? If you could only talk to one person before we all went up in smoke, who would it be? what would you say?  Would you want to be alone when it happened? or would you want to be with someone you care about?